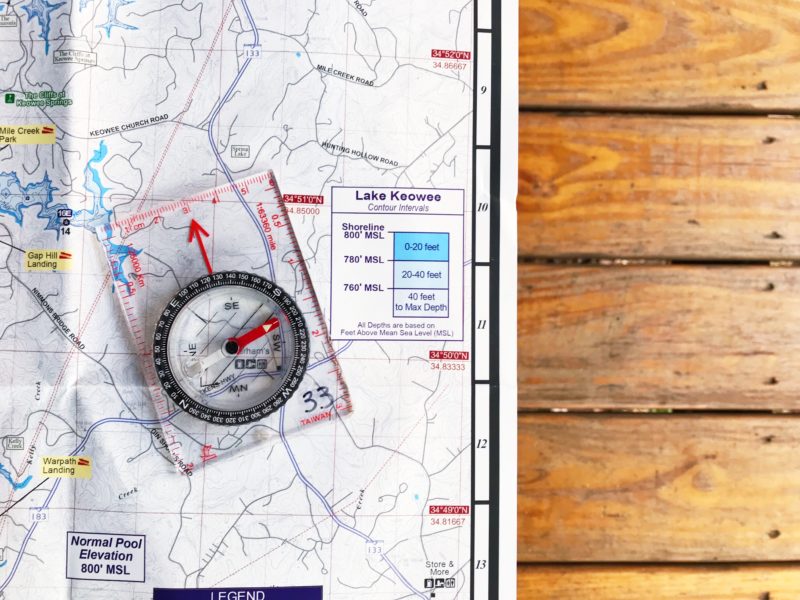 At a women’s outdoor adventure weekend, I held a compass in my palm. I stared down at the arrow ready to make things right.

When I was seventeen, I went on a twenty-one day Outward Bound course in the North Carolina mountains, because my father thought it would be good preparation for college. At the time, I wasn’t so sure.

Looking back, I’m glad I did it. The experience prepared me well for college and beyond. After staying in a tent in the woods for three days by myself, a single dorm room turned out to be a cinch.

But one experience left me with regret. Before an all day bushwhacking task, we were supposed to learn how to use a compass and read a topographical map. I had no interest and didn’t pay much attention.

I got paired with two guys, and we were given until the end of the day to make it to our final destination. We headed off trail. We’d get to a stopping point, they’d pull out the compass and map to get a bearing on the next landmark. They’d huddle. I’d stand back and defer to their decision. Up and down hills we went, slashing through branches until successfully making it to the rest of the group.

Over the years, I’d sometimes wonder, why hadn’t I taken more initiative? Why had I been so passive?

Flash forward to this past week-end. When I saw an orienteering class as one of the choices, I signed up, knowing full well why I was signing up. Even if I might never use it again in the woods, I wanted to learn how to use a compass. I wanted to take initiative. I wanted to pay attention.

A former boy scout leader taught us how to count our paces, orient a map and read the compass. I lay the instrument in my palm directly in front of my chest. I found a boulder. I moved toward it keeping the magnetic needle “under the red tent” of the orienting arrow. Then I found a new landmark and did it again.

As the man imparted more and more tips about hiking and orienteering, I came to see that maybe I’d needed to wait until middle-age to learn the value of a compass—that the lessons would’ve been lost on my seventeen-year-old self. Here are a few things I learned.

A compass will be of no use to you if you haven’t planned ahead. Read the map well. Picked out a route. Memorized the major landmarks, lakes, major roads…beforehand. Or in other words, luck favors the prepared.

Find a landmark and move toward it. Just switch “landmark” with “goal” and there you have it.

Set your compass on a large object on the path. Put the compass in your pocket. Keep your eyes on the object. Said in another way, pay attention to the journey rather than staring at the compass.

If you get lost, stop, accept the fact that you don’t know where you are. Backtrack to the last known marker. Sometimes, if we take a step back and reflect, we can start again in a new direction.

Take a bearing, meaning measure the direction from one point on the ground to another. If we break down a goal to one step after the other, we’ll eventually get there.

Always have a back-up plan. On the trail and in life.

Always let someone know where you’ll be hiking and what time you’ll be off the trail. It’s nice to know, in an emergency, friends and family have your back.

The lesson ended. I thanked the teacher and returned the compass. I walked away, feeling satisfied that I’d turned a regret into a resource.